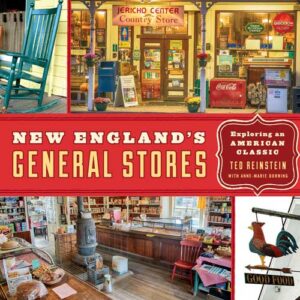 The general store, as old as America itself, harkens back to a simpler time and a more innocent and rural nation. It was a homey and familiar place where you could buy the paper, penny candy, four-penny nails, or simply tarry on a cold winter morning over a cup of hot coffee with a neighbor or two. Long before “Cheers,” the general store was the vital and inviting heart of a community, where everyone not only knew your name, but how you took that coffee, how many kids you had, and how’s your dad doing, anyway? Then came a more urbanized and more mobile America, the rise of the chains stores, and then their giant offshoots, the big boxes. General stores seemed doomed, and many were. But a funny thing happened on the way to extinction: a renaissance. Co-authors Ted Reinstein and former ABC journalist Anne-Marie Dorning profile some of New England’s most beloved and longtime landmark stores, many of which have played out a real-life “Rocky,” rising up from the retail mat against seemingly overwhelming odds. It turns out that neighbors actually miss meeting up in the neighborhood. When it comes to a genuine gathering place, Costco doesn’t really cut it. But a general store still does. New England’s General Stores: Exploring an American Classic looks at how, where, and why this has all happened, by focusing on individual historic stores and their still-unfolding stories. (Globe Pequot Press. Hardcover, and accompanied by the full-color award-winning photography of Art Donahue. Available Sept. 2017).